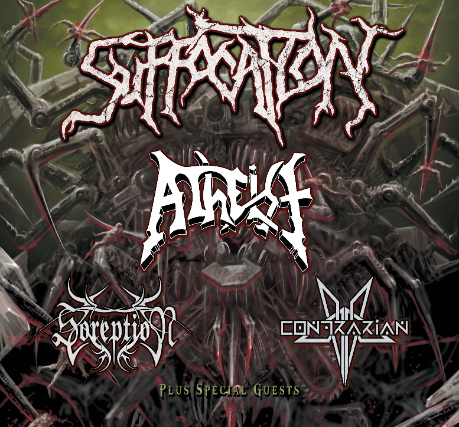 A good four years separate rager Pinnacle of Bedlam from new killer Of the Dark Light. But it wasn’t always like this. Back in the ‘90s, Suffocation maniacs waited, at most, two years between old and new fixes of New York-styled brutality. Landmark full-length Effigy of the Forgotten was only two years removed from debut EP, Human Waste. Likewise, Breeding the Spawn slayed posers and pretenders a year and a half after Effigy of the Forgotten blueprinted Suffocation into the history books. And Pierced from Within, the wickedest death metal put to tape in the mid-‘90s, slammed fist first into mediocrity and mundanity two years after Breeding the Spawn. Clearly, there were times when Suffocation’s march towards total annihilation was fast and furious.

“There’s a reason we don’t put out records every two years now,” asserts long-time Suffocation guitarist and primary songwriter Terrance Hobbs. “For one, we don’t need to. Two, we tour more now than we did in the early days. And three, we’re no longer in our twenties. We all have lives and families now. Plus, I enjoy writing things and letting them organically mature. For example, I started writing songs for Of the Dark Light right after Pinnacle of Bedlam.”

“Ever since I joined, Suffocation’s been on pretty heavy album and tour cycles,” bassist and lyric writer Derek Boyer agrees. “Sometimes the charisma was there, sometimes it wasn’t. We’d be on the road for a year, and only after that, we’d think about putting songs together. Then, we’d get pulled back on the road. That would delay the album cycle. So, our album cycle went from every two years to every three years to now every four years. Pinnacle of Bedlam came out in 2013. That’s a long time ago.”

Indeed, it was. When Pinnacle of Bedlam hit store shelves in the winter 2013, the world was proverbially on its knees. North Korea was conducting underground nuclear tests, a meteor hit a city in Russia’s South Urals, and Benedict XVI resigned as Pope, the first to intentionally do so since 1294. All this pandemonium occurred the same month Suffocation unfurled Pinnacle of Bedlam unto the world. Harbinger of doom it was. Four years later, the blue marble we inhabit is certifiably nuttier and more violent. It’s the perfect vehicle for Of the Dark Light, a full-length that not only welcomes new members—drummer Eric Morotti and guitarist Charlie Errigo—but also sees Hobbs writing the craziest, cruelest Suffocation material since Effigy of the Forgotten.

“Now, bands are very cutting edge,” Hobbs observes. “So, we felt we had to step up our game a little bit. Still be unique, but I will say we’re still using the same formula we’ve been using since Suffocation formed. It’s just ramped up. There are some new things in there that I hope the fans will hear. They’ll have to really listen to the album to hear it though. With the new guys, I had to consider their input. Really, in a nutshell, it came down to the chemistry I had with Charlie and Eric. It was a bonus, to me, that I had players that were really into it.”

“Terrance is the majority songwriter, where I’m the majority lyric writer,” offers Boyer. “I’ll get Hobbs to help me out with some lyrics or he’ll ask me to for my input on his songwriting ideas. We collaborate really well together. Now that we have some newer cats, we started playing live. We immediately thought, ‘Fuck, we need to have a new record out.’ So, we slammed everybody into the same room to finalize the album. Sure, we could’ve put out the album a long time ago, but the chemistry is so good now, I can’t imagine what this album would’ve sounded like without them.”

Written over a four-year span but finalized in the studio—“bells and whistles”, Hobbs calls it—Of the Dark Light ups Suffocation’s already ridiculous ante. The first song written, ‘The Warmth within the Dark’, is just as powerful, technical, and savage as the last song written, ‘Caught between Two Worlds’. It’s hard to believe members Frank Mullen and Hobbs were doing this in their teens. Now, almost three decades later, Suffocation are more intense, have more fire, and can still out-riff, out-growl, and out-blast younger bands mimeoed off classics like Despise the Sun and Blood Oath.

“I like ‘Some Things Should Be Left Alone’ and ‘Of the Dark Light’,” Hobbs reveals. “People should take into consideration when driving into work and playing this record. I don’t want people out road raging too much. There’s no need to plow into somebody at 155 miles per hour while playing this record. This album has a lot of gas to it. Listen to it on your headphones at the gym instead. I think the Suffocation fan are really going enjoy it.”

“A band like Suffocation isn’t going to introduce clean vocals or synthesizer,” says Boyer. “That’s just not who we are. This is Suffocation’s formula. This is the Suffocation fans have known to come and love. We’re not going to stray too far off that path. We have a focal point. We’re a death metal band. We’ve always been kind of quick and technical. We didn’t want to lose that. We just wanted to make all that more exciting, more alive on Of the Dark Light.”

To put Of the Dark Light to so-called ‘tape’, the band holed up—for the fifth time—at Joe Cincotta’s Full Force Studios (Waking the Cadaver, Mortal Decay) in Long Island, New York. From the beginning of December 2016 to just after Christmas, Suffocation mercilessly laid down tracks like ‘Your Last Breaths’, ‘Return to the Abyss’, ‘Some Things Should Be Left Alone’, and a re-make of Breeding the Spawn bruiser ‘Epitaph of the Credulous’. To make sure everything was “tight”, Suffocation rehearsed for almost a month before hitting up Cincotta’s studio. Old habits, turns out, are hard to break.

“Where I come from, everybody has to sit down and learn the material,” Hobbs levels. “Practice it. Once we have it locked down as a band, then we can think about approaching the studio to record it. For us, we tried to take that same approach. It took a little more time than usual. Also, we wanted an organic sound. There’s so much you can do with technology these days. Any band can sit behind a computer and piece together songs and it’ll probably sound pretty great. We wanted Of the Dark Light to sound like Suffocation not a computer.”

“Joe goes back to Souls to Deny,” Boyer remembers. “He was a buddy. It was after that album where we started touring the world, going to places Suffocation had never been to before. On those tours, Joe was the soundman. It’s likely if we had a slamming and heavy sound in the 2000s, it’s because our soundman was our producer. He knew the band, he knew the material, so it’s clear he knew how it should sound in a live setting. From Souls to Deny to Of the Dark Light, we’ve done our music with Joe at Full Force.”

To perfect Of the Dark Light, Suffocation shipped off the recordings to Chris ‘Zeuss’ Harris to mix and master. Suffocation wanted a clear yet punishing sound. So, as with Pinnacle of Bedlam so too with Of the Dark Light. Having recently worked with death metal legends Six Feet Under, hardcore heroes Hatebreed, and tech-thrashers Revocation, Zeuss knew exactly what to put in and extract out of Suffocation for the group’s eighth full-length. Songs like ‘Clarity through Deprivation’, ‘Return to the Abyss’, and ‘The Violation’ have a particularly strong bite.

“We knew, as a friend of the band and a fellow East Coaster, Chris would get what we were aiming for,” says Hobbs. “I’d say this is a full Suffocation endeavor with some outside help, particularly where it concerned Zeuss. It turned out great working with him.”

“We had Zeuss doing the mixing and mastering for Pinnacle, so it made sense for him to reprise his role on Of the Dark Light,” Boyer states. “I thought Pinnacle sounded great, but after I compared it to Of the Dark Light, it smokes Pinnacle.”

But if there’s one thing that’s different about Of the Dark Light, it’s the vocals. Founding member and vocalist Frank Mullen is the main vocalist, but his successor, contributing vocalist Kevin Muller (The Merciless Concept / ex-Pyrexia), also has skin the Suffocation game. That being said, Mullen’s contributions were almost not meant to be. The story goes Mullen voiced his concerns about appearing on the follow-up to Pinnacle of Bedlam while hanging at a local bowling alley with Hobbs, Boyer, new guitarist Charlie Errigo, and a few friends. Frank said to his bandmates, ‘Yo, I don’t think I’m going to do the new record!’ They were quick to respond, ‘Come on, Frank!’ A little coercing later, Mullen and Muller would brutalize their way through Boyer’s transcendental death-wish lyrics.

“Frank will always be part of Suffocation,” assures Hobbs. “He can come in and record just fine. It’s the touring. He can’t be gone for five-six weeks at a clip. That’s not good for his job or his family. If you trace this back to the when the economy crashed in 2008, the likelihood of Frank getting out on tour became less of an option. I give him credit. He does what’s right for Frank and his family. He’s been a part of the band since the beginning. And he’ll always be a part of the band.”

“Frank always comes in with a few jabs,” Boyer laughs. “Like for this record, he said, ‘What in the hell did you idiots put together on this one?!’ He’s funny. Every time, he’s like, ‘I’m not doing this again!’ Then, after it all comes together, he’s like, ‘Ah, this is so sick!’ But Frank isn’t always going to be able to play live with us. So, we’ve brought on Kevin. He actually appeared on a lot of parts on Of the Dark Light. Long-time fans may not even notice there are parts with Kevin singing. He sounds just like Frank. Frank actually called me right after we got the master and said, ‘Fuck! Does Kevin sing on every goddamned song?!’ I was like, ‘No, not all of them.’ Kevin knocked it out of the park on this record.”

As for respite, there is no respite with Suffocation. Musically or lyrically. Conceptually, Of the Dark Light deals with transcendence, the shedding of the physical skin to achieve another plane of existence. But the lyrics originate not from a land of colors, incense, and feel-good vibes. Former labelmates Cynic have already covered that to great success. No, Suffocation, as expected, sourced their metaphysical prose from the depths of darkness.

“I wrote a lot about transcendence, leaving the physical body,” tells Boyer. “There are planes of existence you can’t go with the physical body. The only way to escape it is to end your life, not just of natural causes. There’s a suicidal theme to Of the Dark Light. But it’s not like we sit around thinking about or promoting suicide. No, we’re really talking about transcendence and what happens after.”

“There are a few songs on Of the Dark Light that are about loosely, I think, horror movie topics,” Hobbs adds. “We’re a death metal band. But the majority of the lyrics deal with transcending everything through death. Transcending our physical form. There’s touches of the Tibetan Book of the Dead to the lyrics. I mean, we prepare our whole lives to just pass away. What happens next? I don’t know, but I’m sure I’ll find out sooner or later.”
Atheist